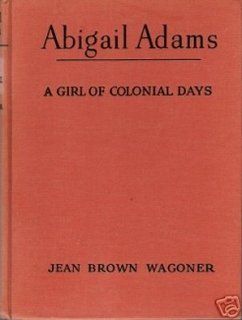 First edition of one in the biography series which appealed to boys and girls.

I often had my nose in a book after the third grade, and usually it was a biography.  Stories about famous people which centered on them when they were my age fascinated me.  I read what they said, what they did, what their families were like and how their way of life differed from mine.  There were over 200 in this series; all were published in the 1940s and 50s by the Bobbs-Merrill Company of Indianapolis.

The covers morphed into blue by the time I checked them out in grade school.

Reading one after another before we studied American History in school, I found that Martha (Patsy) Dandridge and Abigail Smith grew up to be important figures in the colonies. Children who would be leaders on the frontier often had poor childhoods but close families.  The little biographies are classified by some as fiction, because they contain conversation that we don’t know happened, but might have.  The events which the talking evolves around really did, though.  And we were smart enough at the time to realize nobody had an electronic device to record what was said.  Even if they did, who knew the kids would turn out to be key figures of our past?

I just reread Teddy Roosevelt, All-Round Boy, publication date 1953.  From years of doing research about our 26th president, I find most of it to be correct.  Many facts are drawn from TR’s autobiography written in 1913.

I was fortunate to find an old library book in good condition which previewed my current collection of Theodore Roosevelt biographies.

Someone is checking up on the vintage books and issuing revised copies.  Florrie Binford Kichler, who formed Patria Press in 1997 (Bobbs-Merrill was acquired by Howard Sams and then Macmillan in 1985), had read many of the books in her own childhood.  She said she’d had rheumatic fever when she was eight, which required bed rest for three months. “My face lit up every time Aunt Mary came to visit with an orange biography.”  Her first was about Mary Todd.

Silhouetted drawings interpreted events in each subject’s life.  I know from spending time in the Houghton Library at Harvard that this amusing incident took place.  Theodore Roosevelt, and his friend, Freddy Osborn, tipped their hats to the wife of the US Secretary of State, Hamilton Fish.  They forgot that the frogs they had been collecting were in the hats.

Baby Boomers also recall the faceless illustrations on the inside pages.  They resemble scherenschnitte, or paper cutting, which was popular in the early American colonies.  Very different than today’s Who Was… series which plop on the covers a post-modern-looking giant head and shrunken body of the subject.  They, of course, are starkly accurate and leave little to the imagination.  I always liked to think I was there in the chapters of the Bobbs-Merrill ones.  It felt like I could have been in the same room or yard or school, watching and listening.

How about it?  Were you interested in those little orange books?  If so, did it lead to a lifelong love of history?  I’d be interested to hear your story.

22 Replies to “Those Little Orange Books”