The Amazing Bird Collection of Young Mr. Roosevelt ends with Theodore’s entrance to college.  The ten years previous to that event had been, for the most part, an tranquil period of growth in his theatre of family and friends.

Henry Adams was teaching medieval history at Harvard when the teenager landed on campus in 1876.  Adams had experimented with the seminar system, having a half-dozen students read for themselves and discuss/debate rather than giving a straight lecture to them himself.  He reportedly said to a student with a question, “How should I know?  Look it up!”  The Brahmin professor invited the Knickerbocker Roosevelt to dine at his home on at least one occasion during his freshman year.

If there was such a thing as American blue blood, it ran in the Adams family.  Henry’s great-grandfather and grandfather were presidents, and his father was ambassador to England during the Civil War.  Henry worked as his secretary. Adams in 1858, when Theodore Roosevelt was born.  Photo: Massachusetts Historical Society.
With practical experience abroad observing matters of state, Henry moved on to political writing in Washington, D.C.  An intellectual (“You shoot over the heads of most people,” his father admonished), Henry said that Ulysses S. Grant would have seemed archaic even to cave men.  His wit and word orchestrations served him well as editor of the National Review.  By 1889 when Theodore Roosevelt came to Washington as a civil service commissioner, Henry had been to Boston and back.  His wife died in a tragic manner, but he eventually resumed having friends over for food and conversation. 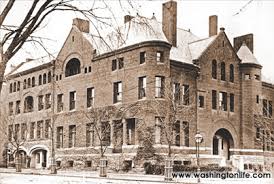 Henry’s neighbor was best friend and equally short-in-stature John Hay.  Hay had been secretary to Lincoln during the Civil War and co-authored his biography.  He would later serve as Secretary of State under Presidents McKinley and Roosevelt.  The Hays, Henry Cabot Lodges, Donald Camerons, and Roosevelts, all political insiders, were regular company.  At a time when women were constrained by more than corsets and floor-sweeping skirts, the ladies took as much part in the talk as the men.  Other close friends were geologist Clarence King, British diplomat Cecil Spring-Rice, and artists Augustus Saint-Gaudens and John La Farge.

Across the decades the gang that John Hay found so happy knew more than a few others: Henry Hobson Richardson, Mark Twain, Henry James, Walt Whitman, Rudyard Kipling, Edith Wharton, Horace Greeley, Robert Louis Stevenson, Matthew Arnold, and the royal family of Tahiti.  Henry said that his circle’s alliance “was undisturbed by power or patronage,” for neither first family Harrison nor Cleveland shared the same interests.

Adams and Hay were condescending to the brash young Roosevelt behind his back.  In ten years when Theodore became president, he invited Henry across Lafayette Square to his mansion for dinner.  Henry complained the occasion was like a boys’ school out of control, and later assigned two words to the chief executive: “pure act.”  With his wealth Henry could pursue whatever he wanted, and continued to write and travel.  His nine-volume history of the United States during the Jefferson and Madison administrations is a classic, as are his novels and autobiography.  The latter, written in third person, won a Pullitzer Prize the year after he died. 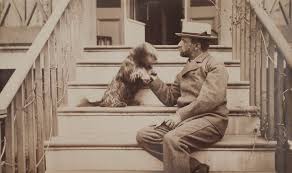 One of the places I’d like to go back in history to is a Sunday morning breakfast at Henry Adams’ house in the early 1890s.  Providing a forum for pliable minds is a wonderful gift.  Isn’t that what teachers do?  Adams was irreplaceable as a patron of the age, and even though he wouldn’t say so, as a teacher.

Now if I could just find his menus.

A blog of this length about a man with so many insights into history has limits. For more reading, and more tangents, try Henry Adams, a Biography by Elizabeth Stevenson; The Five of Hearts, An Intimate Portrait of Henry Adams and His Friends 1880-1918 by Patricia O’Toole (a near-miss for a Pullitzer); and especially his self-summary, The Education of Henry Adams.