People deal with emotions in different ways.  There have been few so “acquainted with grief,” a phrase penned by Isaiah, as Abraham Lincoln, for whom a natural strategy was telling stories.   “Gentlemen, why don’t you laugh?” he asked a group during the Civil War.  “With the fearful strain that is upon me night and day, if I did not laugh I should die, and you need this medicine as much as I do.”

I was reminded of his storytelling skills during a recent performance at Huntington University’s Merillat Center for the Arts.  Four talented costumed historians came from all parts of the country to present “Rushmore Live.”  It was part of the celebration of Constitution Day and the city of Huntington’s founding anniversary.

The reenactment cadre gives a program July 4 each year in South Dakota where they’re engraved in stone.  It was a treat to see and hear them: methodical Washington, rebellious Jefferson, blustering Roosevelt, and witty Lincoln.

Klein interspersed stories, as the others did, when he replied to questions from the audience.  His appearance, mannerisms, and timbre of voice rival Daniel Day Lewis in the recent movie Lincoln.  I looked up more of Abraham Lincoln’s stories.

He often joked about himself:

This fellow, while riding one day, happened upon a woman who curtly remarked, “Well, for land sake, you are the homeliest man I ever saw.”

When a group of men wanted him to close a St. Louis Church which supported the rebellion:

A man in Sangamon County had a melon patch that kept getting ruined by a wild hog. Finally he and his sons decided to take their guns and track the animal down. They followed the tracks to the neighboring creek, where they disappeared. They discovered them on the opposite bank, and waded through. They kept on the trail a couple of hundred yards, when the tracks again went into the creek, and promptly turned up on the other side. Out of breath and patience, the farmer said “John you cross over and go up on that side of the creek, and I’ll keep up on this side, because I believe that hog is on both sides of the creek!”

Another tale of church people:

Wa-al that reminds me of a party of Methodist parsons that was travelling in Illinois when I was a boy, and had a branch to cross that was pretty bad — ugly to cross, ye know, because the waters was up. And they got considerin’ and discussin’ how they should git across it, and they talked about it for two hours, and one on ’em thought they had ought to cross one way when they got there, and another another way, and they got quarrellin’ about it, till at last an old brother put in, and he says, says he, ‘Brethren, this here talk ain’t no use. I never cross a river until I come to it.’

A certain rough, rude, and bullying man in our county had a bull-dog, which was as rude, rough, and bullying as his master. Dog and man were the terror of the neighborhood. Nobody dared to touch either for fear of the other. But a crafty neighbor laid a plan to dispose of the dog. Seeing Slocum and his dog plodding along the road one day, the dog a little ahead, this neighbor, who was prepared for the occasion, took from his pocket a junk of meat in which he had concealed a big charge of powder, to which was fastened a deadwood slow-match. This he lighted, and then threw into the road. The dog gave one gulp at it, and the whole thing disappeared down his throat. The trotted on a few steps, when there was a sort of smothered roar, and the dog blew up in fragments, a fore-quarter being lodged in a neighboring tree, a hind-quarter on the roof of a cabin, and the rest scattered along the dusty road. Slocum came up and viewed the remains. Then, more in sorrow than in anger, he said, “Bill was a good dog; but as a dog, I reckon his usefulness is over.”‘ The President added, with a twinkle of his eye, ‘Hood’s Army was a good army. We have been very much afraid of it. But as an army, I reckon its usefulness is gone.’”

According to an article in the New York Times, Lincoln could also use his stories for practical reasons.  “A distinguished visitor left the White House disgusted after being interrupted by ‘a silly, grotesque, and inapplicable anecdote.’ The visitor complained to one of Lincoln’s secretaries, ‘Now, you say that Lincoln’s stories always have some object or moral; please tell me what object or moral such an absurd, irrelevant, clownish story could possibly have?’

‘What object?’ exclaimed the secretary. ‘The most necessary object in the world at that time: to get rid of you and get to his business, and, according to your own story, he did it.'”

One Lincoln scholar said that during his wilderness years Lincoln told jokes without trying to prove anything at all; he told them “simply because it was natural for him to do so.”  Some then, as in his presidency, were bawdy.  After he became a lawyer he found that his sense of the ridiculous could be useful in the courtroom.

A frontiersman lost his way in an uninhabited region on a dark and tempestuous night. The rain fell in torrents, accompanied by terrible thunder and more terrific lightning. To increase his trouble his horse halted, being exhausted with fatigue and fright. Presently a bolt of lightning struck a neighboring tree, and the crash brought the man to his knees. He was not an expert in prayer, but his appeal was short and to the point:: “Oh, good Lord, if it is all the same to you, give us a little more light, and a little less noise.”

Lincoln, an expert in mimicry and timing, once told this to a clergyman:

There are two ways of relating a story. If you have an auditor who has the time, and is inclined to listen, lengthen it out, pour it out slowly as if from a jug. If you have a poor listener, hasten it, shorten it, shoot it out of a pop-gun.

Love of country.  Love of mankind.  Appreciation of laughter as a way to reduce stress.  Consideration of the audience.  Abraham Lincoln told more than funny sequences of events in obscure landscapes.  He revealed the character and philosophy of a great statesman.

It was 1987 when my husband and I last entered the Magic Kingdom.  Our daughters were seven and ten years old, and somehow we’d been able to take them to Orlando over Christmas Break.  There was security then, but no double bag checks and X-rays.  We also remember that in order to take a picture of Cinderella’s Castle in the dark, we set our SLR camera on the top of a trash can.  In contrast, this year I pulled a smart phone out of my pocket and snapped these shots of the fireworks and light show.

So what else has changed at “The Happiest Place on Earth,” in thirty years?  Prices are higher, to be sure.  You scan your “magic band” to get in instead of presenting a paper ticket.  The customized bracelet also works as a debit card for hotel rooms, restaurants, and fast passes.

There are two more parks to visit now, but we stuck to the main ones: Magic Kingdom and Epcot.  The Muppets have been ensconced on Main Street USA, greeting visitors with a performance about the founding fathers.  Miss Piggy (who else?) represents the royalty from which our new country broke away.  Frontierland, Fantasyland, Tomorrowland — all still there, with modifications such as Pixar’s Monsters Inc. “Laugh Floor.”  Peter Pan’s ride, below, is fun as ever, along with the Little Mermaid, Dumbo, Teacups and Space Mountain.  One can still float through “It’s a Small World,” and wind up with the tune in the head for the rest of the day.

At Epcot, time is best balanced among designing cars for the Test Track, navigating a mission to Mars, and taking in other countries’ shop wares and cuisine.  We had a wonderful experience at the Japanese grille, breaking bread (if not chopsticks) with an extended family from Pittsburgh.  And mouse ears of every color were everywhere: sprouting from headbands and caps; with sequins, bows, and fiber optics.  Those wearing them were all ages, all sizes, from just about everywhere, speaking their home languages.

Never changing is the fulfilled vision of Walt Disney.  Disney World is a place where you meet characters you grew up with, dance in your heart to music you’ve always loved; and dream more of what the future can hold.

As the track cooled from the sprints of Usain Bolt, water was mopped up poolside from the immense victories of Michael Phelps, and equipment from which Simone Biles vaulted to fame was taken down, we sat in awe of the dedication and physical ability of modern Olympians.  Athletes keep getting better and better, we say.  Every year they win more individual medals and set new world records..

Legends like Carl Lewis and Jackie Joyner will always be part of the history of the games for those of us who saw them compete.  But in the first half of the Twentieth Century, there lived a versatile athlete who won three Olympic track and field events and dominated several other sports for 20 years afterwards.  As if that were not memorable enough, it was a woman: “Babe” Didrikson Zaharias..

Mildred Didrikson, born in 1911, was nicknamed “Babe” after the famous baseball player while growing up in Texas.  It was appropriate because of the number of home runs she hit in elementary school baseball games.  The sixth of seven children naturally had to compete with older brothers and sisters, but her talent soon set her apart anyway.

She qualified in five events for the 1932 Olympics in Los Angeles.  At the time, however, women were limited to participating in three (the same mentality as women’s basketball being played played half court, I suppose).  She won gold medals in the javelin throw and the 80 meter hurdles, and silver in the high jump.  The only reason she didn’t win gold in that one was that her head cleared the bar before the rest of her body.  The rule which prevented her first place finish no longer exists. 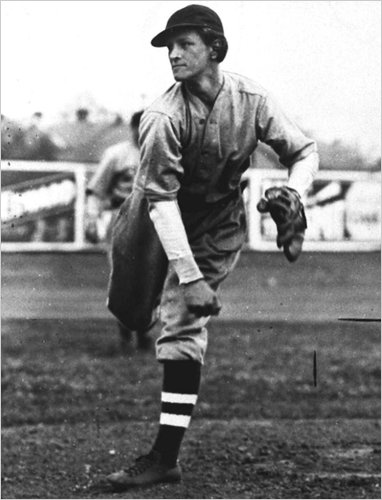 Babe married a wrestler, George Zaharias; he became her promoter.  Other sports she competed in were basketball, softball, tennis, diving, bowling, billiards and golf.  Golf did not come easy to her, but she practiced 10 hours a day.  She won 82 amateur and professional golf tournaments and helped start the LPGA.  She won her final tournament while in remission from colon cancer, but died in 1956, at age 45.

“Before I was in my teens,” she said, “I knew exactly what I wanted to be.  I wanted to be the greatest athlete that ever lived.”

“You can’t win them all, but you can try.”  Her words remind us of the times we wished we’d been in the Olympics.  Or a least tried to be.