This post is the complete opposite of my last one about an old time Christmas celebration, which came easily and took a short time to write.  A month’s wave of procrastination does not change the will to begin it.

You may notice, while you’re reading, that these words exist in a slightly more streamlined format.  This is I suppose in part due to the style of someone I’ve been thinking about for many weeks – a writer whom I admired greatly – Sylvia Jukes Morris. 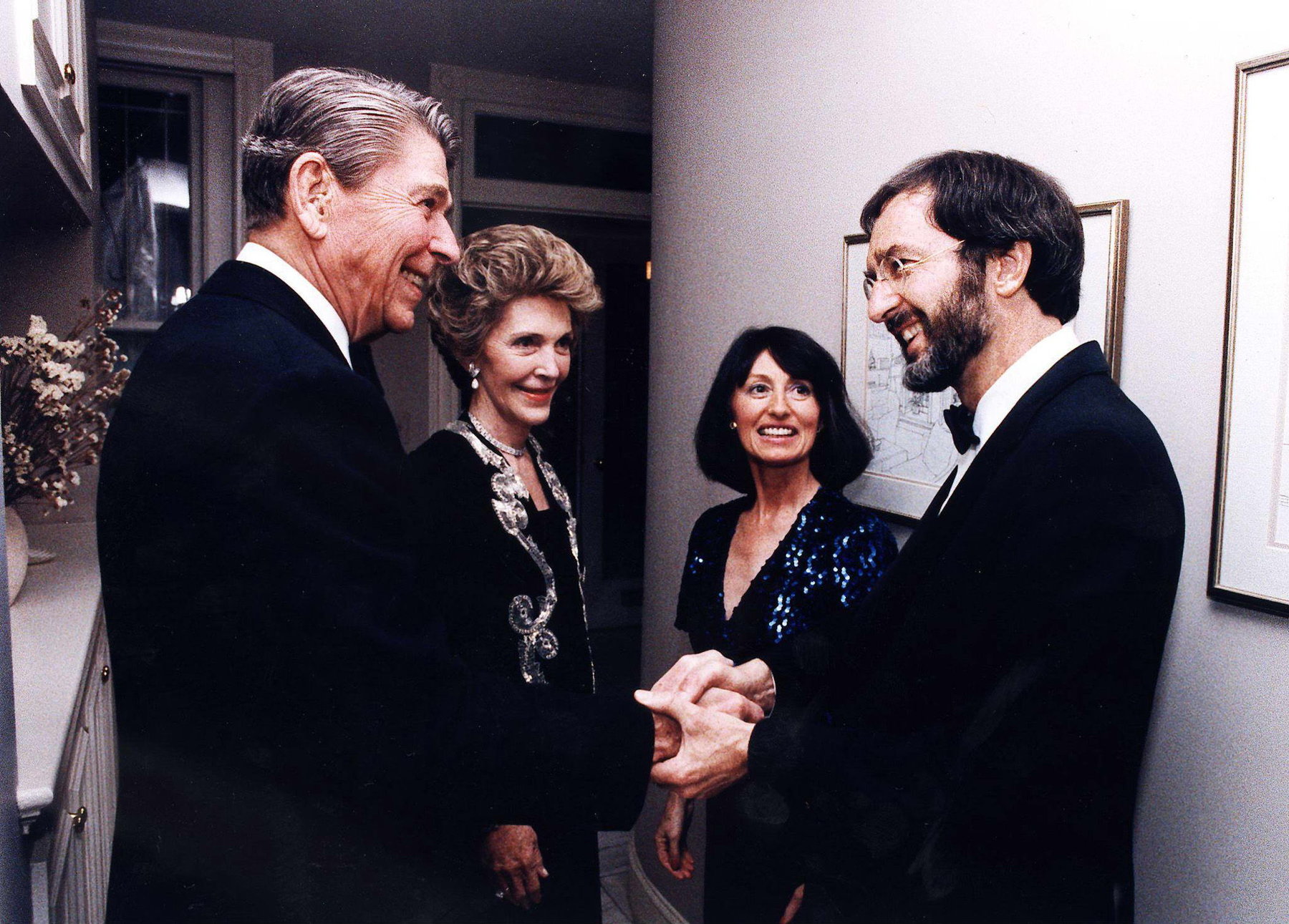 The Morrises chat with President and Mrs. Reagan in the 80s.  (NY Times)

It was a shock to learn in early January that she had passed away at her sister’s home in England,  only eight months after her husband’s death from a sudden stroke.

Sylvia was the author of three definitive biographies, one volume on Edith Roosevelt, and two on Clare Boothe Luce.  The latter, of the twentieth century elite, is probably not a household name, but her life story embodies the society and politics of the time.

Sylvia was married for fifty years to Edmund Morris, Pulitzer Prize winner and prolific biographer of Theodore Roosevelt, Ludwig von Beethoven, Ronald Reagan and Thomas Edison.  Like his wife, he found the research on Roosevelt too much to present in a single book, so ultimately he composed a trilogy.  The sum of their work adds much to our knowledge of the 1800s and the 1900s.

Sylvia and Edmund were a team unequaled in talent, poise and personality.  They invited my daughter and I to their Manhattan home in 2006.  We were doing research at the Theodore Roosevelt Birthplace, and I’d asked for an interview.  It helped that my husband had created a model of Sagamore Hill, the Roosevelt family home, for Mr. Morris.

I remember a spectacular, monochromatic apartment with stairs leading up to a bookcase-lined mezzanine which overlooked Central Park.  The couple pulled some of their books and autographed them for us.  My daughter identified a modern artist whose original painting hung on their dining room wall, with Edmund complimenting her,  “Good eye!”

We saw them again at a Theodore Roosevelt Association book talk in New York City a few years later.  “Margaret!” she said warmly in her beautiful British voice.  I was pleased she remembered me, and we told her we’d seen her recently on C-Span’s Book TV.

I was hoping very much to go to a book signing when Edmund’s Edison was published, but it was not to be.  The first bound book was delivered to their home in Connecticut shortly before he died.  Then, I hoped we could see her after her period of grief subsided, but that was not to be, either.  “It doesn’t get better – it gets worse,” she told a friend in the fall.

They were so close.  And perhaps it was merciful that she didn’t have to face her first Valentine’s Day without him, but instead join him where their marriage had been made.

A moving tribute to Sylvia may be found at this link: https://spectator.org/rip-sylvia-jukes-morris-lady-of-letters/

2 Replies to “Two Authors, and the History of Two Centuries”