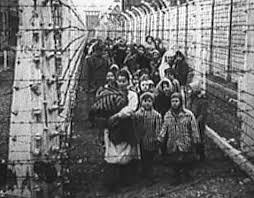 Eva (left) holds her sister Miriam’s hand as they walk out of Auschwitz on January 27, 1945.  From Eva Kohr’s Facebook page.

On July 4 a precious soul name Eva Kor, age 85, was liberated from her body.  She passed from the world not far from the site of the concentration camp in Poland where she and her twin sister were orphaned and held against their will during World War 2.  Throughout 1944 and into 1945 they suffered through Nazi Dr. Josef Mengele’s inhumane genetic experiments amid horrific living conditions.

Her story is well known, retold in a documentary made this Spring which earned several regional Emmy awards.  The CANDLES Holocaust Museum in Terre Haute, Indiana (Eva’s longtime home) was organized and nurtured by her.  She wrote two riveting books.

I was honored to meet Eva in March after she lectured at Indiana Tech in Fort Wayne.  We could have listened to her much longer; she said she had always been concerned that Jews who died at Auschwitz were remembered more than the ones who survived.  Afterwards she waited patiently as assistants looked for a card reader to process payment for the books.  I wrote a check, so I was one of the first to buy them and have them signed.  “Forgive and Heal,” it reads.

Her books reveal the same horrors as others of people who endured the Holocaust: The Hiding Place, The Boy on the Wooden Box, The Diary of Anne Frank, The Secret Holocaust Diaries.  But hearing her in person was something I will never forget.

I found similarities between Eva and Miriam’s rural European childhood and things I know about Indiana families of the 30’s.  They had plenty of land to grow vegetables and crops, a ramshackle farmhouse, milk cows, and flower and vegetable gardens.  They did chores inside and outside, as did their two older sisters.  But the family was Jewish, unlike most of the population there.

Eva and Miriam next to their mother, at home.  This crumpled photograph was the only thing Eva took from the house after she was able to return.

In 1940 the Hungarian army took over, coercing local children and adults alike to join their campaign of hate toward the Jews.  In 1942 their travel was restricted, and the next year the Mozes family was placed under house arrest, made to wear yellow Stars of David on their clothing.  Though they tried to escape across the border, they were put on cattle cars and taken to Osciewin.  That is Polish for Auschwitz.  The section they were taken to was called Birkenau, three kilometers away from the main camp.

Eva and Miriam’s father and sisters were immediately taken away, and after their mother answered a soldier’s question about the younger girls being twins, she was, too.  They never saw them again.  They were tattooed with numbers on their forearms and taken to awful barracks to live where there were corpses and rats on the floor.  With only coffee (boiled water) and a piece of dark brown bread to sustain them each day, they pledged to watch and care for each other, knowing if one of them perished the other one would be carted off to one of four gas chambers.

Eva’s recollections of Mengele, a man she said was handsome and charming, are chilling.  He treated the children as lab animals.  They were taken three times a week to a large gymnasium, photographed and observed for eight hours at a time.  The Mozes twins were injected with different children’s blood or given shots with diseases they never knew.  Others were disfigured.  One injection brought Eva near death.

She heard Mengele say,”Too bad.  She is so young and only has two weeks to live.”  Eva said then and there she decided to live.  And she did.  Several near escapes of being mowed down by machine guns followed before the Soviet Army came to release them from the camp in the first month of 1945.

Eva and Miriam after the war.

They were reunited with an aunt and returned to their home briefly, but after seeing how neighbors had looted their belongings, left for Cluj, Romania where the aunt had an apartment.  In 1950 they joined another uncle in Haifa, Israel, where they lived in a youth village set up by the government.  Both joined the army; both married.  Eva’s husband was an American tourist from Terre Haute, Indiana.  The couple moved there and started a family.

In 1984 she founded CANDLES, Children of Auschwitz Nazi Deadly Lab Experiments Survivors.  The group located 122 survivors in ten countries, helping many deal with issues they had.  Miriam passed away in 1993, but that same year Eva discovered a doctor named Minsch in Germany who had worked at Auschwitz and signed mass death certificates. She gave him a personal letter of forgiveness in which she also included Mengele.  She said it lifted the burden of pain she had been carrying for 50 years.

Eva continued her mission at CANDLES until her death last week in Poland, on a trip she led for the 75th anniversary of their liberation.

Thomas Jefferson and John Adams both died on July 4, 1826, 50 years after they signed the Declaration of Independence.  We consider them fathers of our free country.  Eva Kohr died on July 4, 2019, 75 years after she walked away from Auschwitz.  She completed her liberation by forgiving the doctors and others who hurt her, and taught us all to do the same.

When we heard her in Fort Wayne, Eva said that one of her regrets is that she had never been able address a session of Congress about her experiences.  What a tribute it would be to let our Senators and Representatives know that we think one of her children should carry out her wish.  It would extend her mission: the power of the will to live, and the power of forgiveness.

Note: I originally stated that the soap given prisoners at Auschwitz was made with fat of people who had been exterminated, which Eva was told and believed to be true.  Charles Moman, a good friend of hers, says that this is not factual.