There is a prestigious group, The Explorers Club, members of which must have contributed something major to make the unknown known.

Founded in New York City in 1904, The Explorers Club promotes the scientific exploration of land, sea, air, and space by supporting research and education in the physical, natural and biological sciences. The Club’s members have been responsible for an illustrious series of famous firsts: First to the North Pole, first to the South Pole, first to the summit of Mount Everest, first to the deepest point in the ocean, first to the surface of the moon—all accomplished by our members. –www.explorers.org

Rear Admiral Robert E. Peary and his onetime associate, Dr. Frederick A. Cook, were early members of the Explorers Club.  Each claimed to be the first to find the North Pole.  Admittedly, scientists and professionals are the ones who usually make scientific discoveries.  That’s how it is.  But wait until the end of this to decide for yourself.

Coming up on 110 years ago, Peary, a civil engineer in the Navy, was enveloped in the last of many attempts to reach the exact location of 90 degrees North Latitude.  His expedition, sponsored by the National Geographic Society, included assistant Matthew Henson and several native Inuit people.

He’d begun with 50 men, 50 sledges and 250 dogs in August 1908.  Within a hundred miles of the pole, the support team left, with himself, Henson, and four Inuit men going on.  On April 6, 1909, Peary left part of a flag and a note in a tin in the drifting ice.  Much later Henson would say that Peary told him, “I do not suppose we can swear that we are exactly at the Pole.” 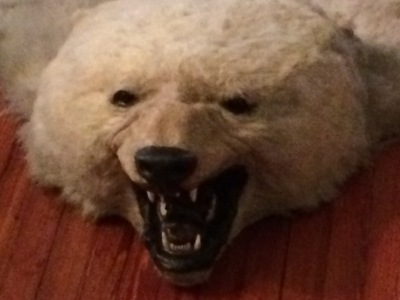 The return ocean trip was on the USS Roosevelt, named for the Peary’s friend in exploring and United States President Theodore Roosevelt.  The good admiral gave Edith Roosevelt  a polar bear rug, which she placed on the floor of her otherwise delicate drawing room at Sagamore Hill on Long Island.  It may be seen there today.

When the Peary people got home, they had quite a shock.  Dr. Frederick A. Cook, who’d traveled with Peary many times, was claiming to have been at the North Pole one year earlier than his former friend.

It seems the Cook party had reached the North Pole on April 21, 1908.  Cook and two native hunters named Etukishook and Ahwelah left a note there in a brass tube amid violent winds.  On the return trip they were blown off course and had to spend the winter on a desolate island.  They’d been given up for dead, but 14 months after they started, they returned to Denmark, where royalty and the public were hailing them as heroes.

The media had quite a circus with this, as newspapers tallied up votes for Peary and votes for Cook.  In the end (of that decade), the National Geographic Society and United States Congress declared Admiral Peary the winner.

Well, then there were two world wars and not a lot more hubbub about the trips to the end of the earth.  But in 1952, Lieutenant Colonel Joseph Fletcher of Oklahoma flew his plane there, as marked by his instrument panel.  And in 1968, something more unusual happened.

Ralph Plaisted was the first confirmed person to land on the North Pole, in 1968, on a Ski-Doo.  http://www.justacarguy.blogspot.com

An insurance salesman from Minnesota, Ralph Plaisted,  and a few friends made it there and were verified by a government jet: “Every direction from where you fellows are is South,” the pilot told them.  It was 11 a.m. on April 20, 1968.

They arrived on snowmobiles.  They had to ride on their knees through the rough ice, knowing that it could break at any time in the -20 degree temperatures over deep water.  They did have supplies and other modern conveniences airdropped, and were sponsored by several companies including Pillsbury which had given them astronaut food to test.   National Geographic turned them down.

One of the party, Jerry Pitzel, is still living.  He is a retired geography teacher in Santa Fe, New Mexico, who may advise Will Ferrell in an upcoming movie about the adventure.

Which all goes to show, maybe, that you don’t have to be a member of a prestigious club to make a discovery.  A regular person can do it, too.