In early November 1918, General John Joseph Pershing was in France, where the armies of that country, England and Germany had been obliterating each other in a stalemate for four years.  He was an experienced soldier.  He was gifted in leading men and respected for being steady and disciplined.

Appointed head of the American Expeditiary Forces (AEF) in 1917, he’d transformed an army of 130,000 into 2,000,000 — and announced that they’d be coming over there.  As it happened, not all were shipped out, but news of the sheer size of our reinforcements probably began the end of World War 1.  France and England ran out of men and the United States had their backs.

Pershing intended for the AEF to fight in their own units instead of being amalgamated under the direction of foreign generals.  He felt the differences in language and culture would hinder their effectiveness. He was constantly organizing and training soldiers and staff in the field.  The American commander, whom President Wilson named “General of the Armies” (a title given later only to George Washington), was against the Armistice on November 11.  He wanted unconditional surrender.

Instead there was a cease-fire.  Afterwards, Pershing restructured officers’ schools, which made a difference in the leaders of the next world war.  Many who had served under him in the first would remember his example: Patton, Marshall, MacArthur.  Dedicated to honoring his soldiers for their sacrifice during the Great War, he oversaw the building of battlefield monuments across the Atlantic.

The stalwart Pershing grew up in Missouri and took an appointment to West Point to further his education.  His mother puportedly said, “But Jack, you’re not going into the Army?”

He was president of his class at the United States Military Academy, though not the cadet with the highest grade point average.  He participated in Indian campaigns, taught military procedure at the University of Nebraska, and commanded an African American unit in the Spanish-American War, for which he was nicknamed Black Jack.  He also became a lifelong friend of Theodore Roosevelt.

During the Roosevelt administration he moved up in rank rapidly.  He married and had four children, serving in the Philippine Islands.  In 1915 his happy family life was shattered  when his wife and three daughters were killed in a fire in California.  Only his son, Warren, survived.  In 1916 he took troops to Mexico to stop Pancho Villa from terrorizing the US side of the border. 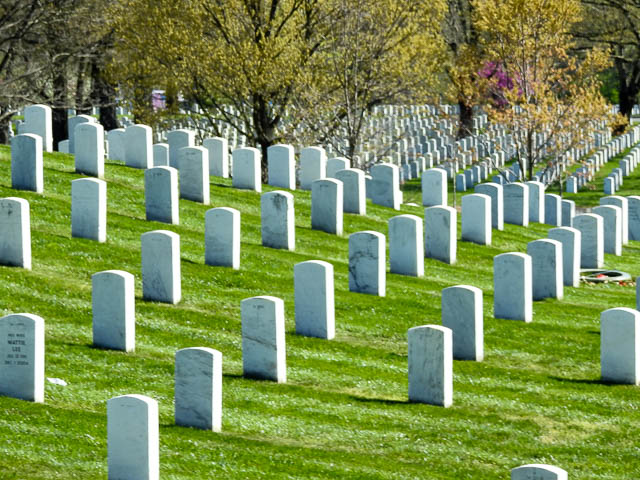 Pershing asked that he be laid to rest in Arlington National Cemetery with the men he was with in World War 1, and a headstone like theirs.  http://www.washingtonwalks.com

It always bothered me when I was teaching that there were more biographies for children of pop stars and football legends than of people like Pershing, who had a great impact on our nation.

Also distressing is that some question his role instead of attributing accomplishment where accomplishment is due, or even conclude the Central Powers would have lost without our help. I guess people of this generation are into revisionist history.  Of course there are many more details than I’ve presented here, so one needs to do a quite a bit of reading to begin to understand Pershing, his life and his times.  I prefer accounts made by writers closer to the generation in which he lived.  They knew.

FDR knew, too.  During World War 2 he sent a greeting to General Pershing, who was living at Walter Reed Hospital and in declining health.  “You are magnificent,” the president told him.  All of America should agree.  If they choose to take time with the facts.