When Theodore Roosevelt was a young man, he blew a path through the untamed landscape of the arid Dakota Badlands: hunting, riding, bulldogging, and building up his health.  He would tell stories and write more than a few books on his experiences, prompting friends to travel west themselves.  One of them, Owen Wister, wrote a novel based in Wyoming called The Virginian in 1902.

The story became a stage play two years later; when talking pictures were an option, it was made into a  movie starring Gary Cooper.   The character he played was a ranch foreman from Virginia, but that was about all we knew of his past.  We never heard his name.  Hired hands Trampas and Steve and a schoolteacher named Molly made the cattle-rustling plot more exciting.

Joel McCrea was the next reincarnation of The Virginian in 1946.  It was inevitable that the characters would join the television cowboy series  boom of the 50s and 60s.  So James Drury, Doug McClure and Gary Clarke brought us the Virginian, Trampas and Steve starting in 1962.  It had a different format than most — a weekly 90-minute movie with guest stars from Hollywood’s heyday, and others who would soon become popular. 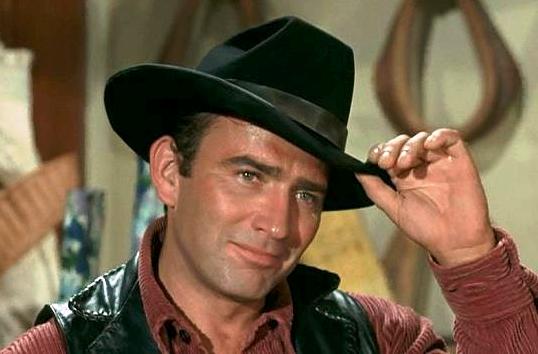 Steve became a nicer, funnier guy while Molly ended her tenure at the end of the first season, playing a newspaper editor rather than a schoolteacher.  But Trampas stayed for the nine-year run of the show, helping the bossman imprint an indelible image of adventure, comradery and honor of the Old West.

Recent airings via our modern multitude of networks have brought a new audience to The Virginian and its final season, Men from Shiloh.  The opportunity to meet the stars of the 50 year-old series has been made possible by western festivals, the most recent of which was in Ardmore, Oklahoma this month.

In addition to regulars Drury, Clarke, Roberta Shore (above) and Randy Boone, other actors who greeted fans at the “Westfest” included Clu Gulager, L.Q. Jones, and Don Collier.  The latter three amassed hundreds of appearances in western TV shows and movies.  Mr. Collier said of working with John Wayne: “You got along fine with him if you did three things: show up on time, know your lines, and stay on the set until you were dismissed.”

Theodore Roosevelt once said he would not have become president if he hadn’t gone West.  He wouldn’t care much for more recent, more graphic versions of this movie genre.  But surely he would have a lot to talk about with the Virginian and his contemporaries, as he did with their creator, Owen Wister.