These were my remarks for the 2018 Spring Meeting of the Indiana Chapter of the Theodore Roosevelt Association at the James Whitcomb Riley Home and Museum, Indianapolis:

Let’s start with a trivia quiz about the teddy bear (answers below).

Our meeting tonight is next door to the residence of James Whitcomb Riley.  You have seen firsthand that it is a lovely preserved, not restored, late Victorian home, one of very few in the United States.  We are also having a silent auction fundraiser for the Teddy Bears for Kids program of the Theodore Roosevelt Association.  We will donate the teddy bears we buy to Riley Hospital for Children, so it seemed a very appropriate venue for the evening. 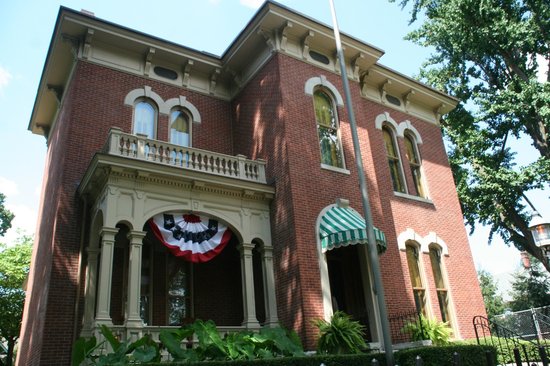 Besides the teddy bear, the two subjects of this presentation are obvious: Theodore Roosevelt, our twenty-sixth president; and James Whitcomb Riley, the Hoosier Poet.  They are remembered today as literary men of the same era, both best-selling authors with massive bodies of work.  Roosevelt wrote 36 books, the most highly-acclaimed being The Winning of the West series, while Riley composed over 1,000 poems, including Little Orphant Annie and The Frost is on the Punkin.

They were both born in the month of October, Riley in 1849 and Roosevelt in 1858.  Roosevelt grew up in the east; Riley in the midwest.  Their fathers were involved in the Civil War, leaving their wives and children at home.  Mr. Riley enlisted in the army; Mr. Roosevelt was head of the Allotment Commission which sent home soldiers’ pay to their families.

Roosevelt and  Riley were both taught at home in early childhood.  Their mothers reading aloud to them were some of their fondest memories.  Though their careers took different pathways, they both went on public tours, Riley with readings and Roosevelt with political speeches.  Both received honorary degrees from Indiana University.   They had their portraits painted by John Singer Sargent in the same year.  It seems Riley was the more cooperative subject, however.  TR just never liked to sit still.

But there were decided differences.  Roosevelt came from a privileged family; Riley did not.  Roosevelt graduated from Harvard University; Riley went right to work, selling patent medicine, painting signs, and writing for newspapers.  TR was married twice and had six boisterous children; James Whitcomb Riley never married.  And while the Roosevelts’ musical talent was limited to playing the Victrola, as Edith liked to say, Riley was an accomplished violinist.

James Whitcomb Riley was an alcoholic whose addiction affected his public engagements, while Theodore Roosevelt was a teetotaler who saw his brother destroyed by drink.

The Library of Congress Manuscript Division includes a letter from Theodore Roosevelt to James Whitcomb Riley dated November 3, 1902.  It says, “My Dear Mr. Riley: I value the book greatly, and of course what you have written in the fly-leaf not merely adds to the value of the book, but puts me under obligation to you.  I thank you heartily.  Faithfully yours, Theodore Roosevelt.”

When I checked with the National Park Service, they confirmed that in Theodore Roosevelt’s extensive library at his home, Sagamore Hill, on Long Island, there is a six-volume Complete Works of James Whitcomb Riley.  It was in the inventory from 1919, which was the year TR died.  Two more Riley books were added later, so it seems Edith liked his poems, too.

Theodore Roosevelt visited Indiana many times.  Here is a photograph taken at the dedication of the Henry Lawton Statue in 1907 (Major General Lawton was known for capturing Geronimo, fighting with the regular army in the Spanish-American War, and for his peacemaking efforts in the Philippines, where he was killed in the Insurrection of 1899).  When this picture was taken, the award-winning statue was close to the Marion County Courthouse; it was later moved to Garfield Park.  James Whitcomb Riley and Vice President Charles W. Fairbanks of Indiana are seated on the speaker’s platform in this scene.  Riley composed and read a poem for the occasion, one of his last public events before the stroke which inhibited his final years. 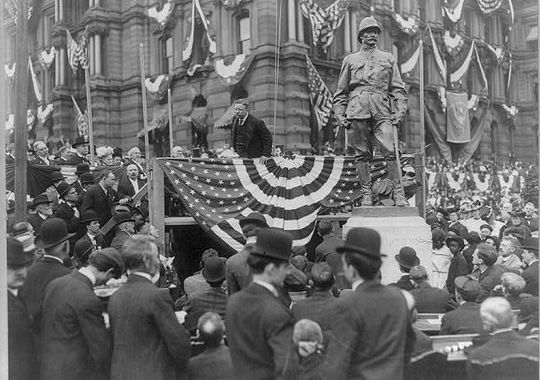 But here we come back to the reasons both men are famous in the literary world.  They appealed to the people, Riley with his dialect of common folk; and Roosevelt with his intense love of history and justice for every citizen.  People, especially children, came in droves to visit them at their homes.  Their common values manifested themselves in a Riley poem.  Larry Marple has agreed to read Our Kind of a Man for us.

The kind of a man for you and me!
He faces the world unflinchingly,
And smites, as long as the wrong resists,
With a knuckled faith and force like fists:
He lives the life he is preaching of,
And loves where most is the need of love;
His voice is clear to the deaf man’s ears,
And his face sublime through the blind man’s tears;
The light shines out where the clouds were dim,
And the widow’s prayer goes up for him;
The latch is clicked at the hovel door
And the sick man sees the sun once more,
And out o’er the barren fields he sees
Springing blossoms and waving trees,
Feeling as only the dying may,
That God’s own servant has come that way,
Smoothing the path as it still winds on
Through the golden gate where his loved have gone.

The kind of a man for me and you!
However little of worth we do
He credits full, and abides in trust
That time will teach us how more is just.
He walks abroad, and he meets all kinds
Of querulous and uneasy minds,
And sympathizing, he shares the pain
Of the doubts that rack us, heart and brain;
And knowing this, as we grasp his hand
We are surely coming to understand!
He looks on sin with pitying eyes–
E’en as the Lord, since Paradise–,
Else, should we read, Though our sins should glow
As scarlet, they shall be white as snow–?
And feeling still, with a grief half glad,
That the bad are as good as the good are bad,
He strikes straight out for the Right– and he
Is the kind of a man for you and me!

Answers to teddy bear quiz : Missouri, the Washington Star, unsportsmanlike to shoot a bear which was tied up, candy store, Ideal.