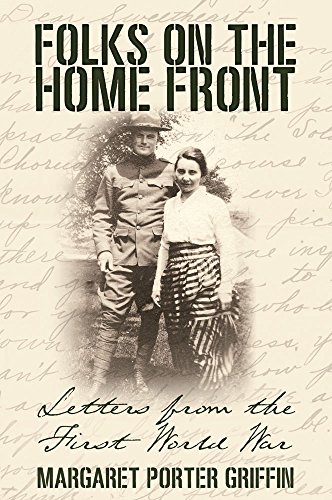 I wish I could have known the grandparents on my mother’s side of the family like I did on my father’s side.  Having older relatives to mentor and dote on you as a child is something that can never be replaced.  But I came close to getting acquainted with their lives, at least a part of them, when I transcribed and typed around 400 letters they wrote to each other when they were courting.  I thought, “This is a wonderful story.”  So I’ve edited and published their correspondence in a new book.

Its working title was “Miss Maggie and the Captain.”  The era was World War I, and he (Jesse) was in a Mississippi training camp while she (Margaret – yes, I’m named after her) taught school back in northeastern Indiana.  But I thought it should be called something to do with the times, so I settled on Folks on the Home Front: Letters from the First World War.  The term “home front” was actually first used in 1917.

As I say in the synopsis on the back cover, things took more time then: corresponding, cooking, cleaning house, and traveling.  But we do much of what they did, one hundred years later.  We work at home and school.  We look at the new cars coming out (although these were really the new cars, the first that families bought).  We like to watch baseball games as they did.  And we get together with our friends, eat, tell stories, tell jokes.

There was a frightening World War in progress, and the United States was gearing up for the effort.  Everyone was concerned, pro or con; and many like my grandfather involved directly as soldiers.

To make more sense and to connect my grandparents’ story to what was going on around them, I researched World War I events for quite a while.  In the library there are many books on the Civil War and on World War II, but not so for World War I.  I hope that this book will help fill in a bit of the gap.  And that readers will enjoy their expressions, their experiences, and their devotion to each other.

The young family at home on the farm in the late 1920s.  My mother, who is the baby in this picture, would save all of their letters; Jesse and Margaret had ten children in all.

Folks on the Home Front (175 pages; Dogear Publishing, Indianapolis, 2017) is available by ordering on Amazon or contacting me personally.

I am available for presentations on the book in general and have compiled activities for classrooms on locating primary source material.  I’d love to tell you more about my Folks on the Home Front.