Remington’s Broncho Buster at home with several other bronzes on the mantel of the North Room at Sagamore Hill.

Two familiar western artists of Theodore Roosevelt’s lifetime, Frederic Remington and Charles Russell, were intermingled with the twenty-sixth president’s life as cowboy and lover of nature and history.

A sick, asthmatic boy, “Teedie” read The Leatherstocking Tales while resting indoors.  Living on the frontier appealed to his imagination and sense of adventure.  He yearned to be a western hero like the characters in the books.

So as an adult, he bought a ranch in Dakota Territory and roughed it himself (albeit as the cowhands’ boss).  Then he began to write about it.  Theodore Roosevelt’s Ranch Life and the Hunting Trail was serialized in Century Magazine in the late 1880s, and he hand-picked Frederick Remington for the illustrations.

The National Gallery of Art, “Stampede by Lightning”

Remington lived most of his 48 years in New York.  He attended Yale and was drawn to the romance of the west, working on ranches and in saloons for a time.

Douglas Brinkley says in his massive volume Wilderness Warrior (HarperCollins 2009) “To Roosevelt, at least before the Spanish-American War, Remington (who’d once herded sheep) was a plebian, not fit to share a private club.”  The artist was assigned by William Randolph Hearst to cover the Rough Riders in 1898.

And after the brief war, the volunteer soldiers presented their colonel with Remington’s The Broncho Buster while mustering out on Long Island.  He tells in his autobiography how touched he was at the gesture.

Remington also wrote his own novel of the west, John Ermine of Yellowstone, in 1902 along with 30 illustrations.  Roosevelt liked his description of roaming Crow tribes.  “It may be true that no white man ever understood an Indian…but you convey the impression of understanding him!”

Two years before the artist’s death during an appendectomy, Roosevelt said that he had done “real work” for this country and Americans owed him a debt of gratitude. “He is, of course, one of the most typical American artists we have ever had, and he has portrayed a most characteristic yet vanishing part of American life…”

The president also said, “The soldier, the cowboy and rancher, the Indian, the horses and the cattle of the plains, will live in his pictures and bronzes…for all time.”

Charles M. Russell, on the other hand, was born in St. Louis and lived his adult life in Montana, providing drawings and paintings for authors Bret Harte, Owen Wister and Roosevelt.

Iconic were the ones of dying cattle on ranches in the severe blizzards of 1887.  Skulls, ribs, skin and bones.  Devastation, starvation.  And the ruin of many cattle operations, including Roosevelt’s.

Correspondence between Roosevelt and Russell is housed at libraries around the country.  On the occasion of the loss of the Progressive Party in 1912, Russell relays to his friend the disappointment felt by the school children of Great Falls. 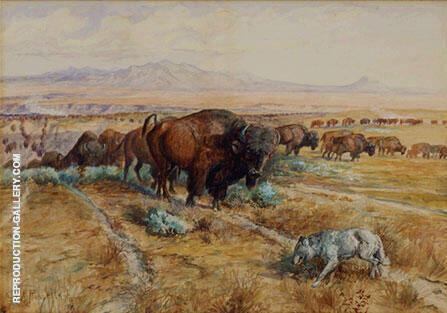 http://www.reproduction-gallery.com “Guardian of the Herd”

The Freer Gallery was built in Washington, D.C. in 1906 because Theodore Roosevelt, pounding on his executive desk, demanded the United States accept a large collection of art (including oriental paintings and the famous Peacock Room by James M. Whistler) and half a million dollars for the building to house it.  Smithsonian officials had been dragging their feet. TR established by Executive Order 1010 the Council on Fine Arts, a federal agency, in 1909.  President Taft replaced it with the Commission on Fine Arts the next year.

When Roosevelt saw works of cubism early in the Twentieth Century, he exclaimed “This isn’t art!”  Art was life to him, and life, especially among the landscape, people and animals of western plains and mountains, was never abstract.  It was real.

The Amon Carter Museum of American Art in Fort Worth, Texas, has an extensive collection of Remington and Russell art, which may be browsed at http://www.amoncartermuseum.org.