As I sat back in the recliner thinking once more about how to maintain an exercise regimen in the year to come, I was interested in how presidents have kept fit throughout history.  Most of them did nicely, which is not surprising considering they had to stay active to deal with demands of the office.

Early leaders George Washington and Thomas Jefferson developed the skill and coordination of excellent horsemen.   A few years later, John Quincy Adams swam (naked) in the Potomac River every morning, long before it was known that this was the ultimate cardiovascular exercise.

Abraham Lincoln, who grew up guiding a horse plow and splitting wood rails for fences, once used his strong arms to throw a heckler out of a political rally. 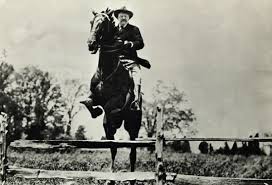 Theodore Roosevelt overcame his childhood frailty in the arid west as a hand on his own ranch.  He was always active in boxing, and led other dignitaries on point-to-point walks in Rock Creek Park.  One time he asked a French ambassador, when they took off their clothes to cross the river, why he did not remove his gloves.  “Why Mr. President,” he exclaimed, “We might meet ladies!”

William Howard Taft may not be remembered as athletic because of his weight and the famous custom bathtub installed in the White House, but he later trimmed 100 pounds off his frame and lived a long life as a Chief Justice.  He liked golf and tennis.  TR had cautioned him not to be photographed playing, however, because it might make him look too upper-class.

Probably the most interesting game played by a president was named after him.  Hooverball, invented by doctor, involved two teams tossing an eight-pound medicine ball over a net every morning during the Depression.  It would have much easier for Herbert Hoover than tackling the plight of Americans at the time.

Franklin Roosevelt developed his upper body strength by pulling ropes to hoist the elevator up and down, sitting in a wheelchair, at his home.  He was also a swimmer.  Harry Truman took 120 steps per minute during his mile and a half daily walks.  This was the World War I marching pace, which would make any Fitbit happy.

Dwight Eisenhower played football for the United States Military Academy, once tackling legendary Native American star Jim Thorpe.  John Kennedy played football with his family members until his weak back prevented it.  Concerned about flabby citizens of the 1960s, he initiated a nationwide fitness program and commissioned the recording of “Chicken Fat” still used in schools today.

At the top of the list of fit presidents is Gerald Ford, despite his reputation for being clumsy.  That was because his knees had been used up as a football player for the champion University of Michigan Wolverines.  He turned down offers from the Green Bay Packers and Chicago Bears, and later settled for playing golf.

Ronald Reagan was a high school lifeguard who saved over 70 people from drowning.  When president he stepped up body building with specially-designed workouts after he was shot, and even wrote a fitness article for Parade Magazine.  “In my view, every exercise program should have an outdoor element to it – whether jogging, bicycling, skiing, hiking, or walking.  I prefer horseback riding and, whenever possible, hard manual labor at the ranch,” he said.

Warren G. Harding was probably in the worst shape of all of our presidents: boozing, smoking and sitting still.

I will have to slim down to give him an example.