http://www.brit.co.com
“You don’t need any more Christmas wrapping paper!”
My daughters have said this to me more than once when we’re out shopping or looking through stationery catalogs.  But can you ever have too much wrapping paper?  It makes giving more fun; it allows you to create your own art form; I just like looking at the presents and grouping them in stacks according to color (yes, a little bit of the OCD tendency there).  And the rolls fit under the bed so well.
How did we get from “brown paper packages tied up with strings” to the $2.6 billion gift wrap industry today?  A little checking on the Internet reveals that it makes up half the 85 million tons of paper products sold each year, and 30 million trees are cut down to produce it.  Yikes!
In the Second Century B.C., the Japanese placed gifts of money in envelopes called “chin poh” made from hemp, bamboo, and rice.  They also wrapped gifts in “furoshiki,” or reusable cloth.
Before 1900 Victorians wrapped their gifts in elaborate paper and ribbon. Mercantiles used tissue paper.  In 1916, storekeepers Joyce and Rolloe Hall ran out of it and substituted some special French paper instead.  It caught on in following years, and eventually became a key product of their company, Hallmark.
The process of wrapping a present can be tricky.  You’ve first got to cut the paper to the right size; if you don’t, trimming the ends after the middle part is secured requires precision so that it covers. but doesn’t overlap too much.  Invisible tape is preferable to cellophane, which shines on the seams.  We would never want anyone to think this package was taped, would we?  I used to teach a geometry lesson while gift wrapping: right angles and perpendicular lines, acute angles…
And then, ribbon.  I love wired ribbon that can be stretched and molded just how you want it.  I’ve given up curling ribbon and found it better to let the loose strands fall in a mass than having them boing like Shirley Temple’s curls.  I’ve also massacred those “easy pull” flat ribbon bows so often that I don’t buy them anymore.
I do like gift bags, which can be reused to the end of saving part of those trees.  As can the tissue paper that keeps the giftee in the dark about what’s inside.
Just before Christmas, when my dining room table is covered in paper rolls, flat wrap, boxes, ribbon, and tags, I look forward to the days ahead when family will gather and memories will be made.  The embellishments make it a little more happy. 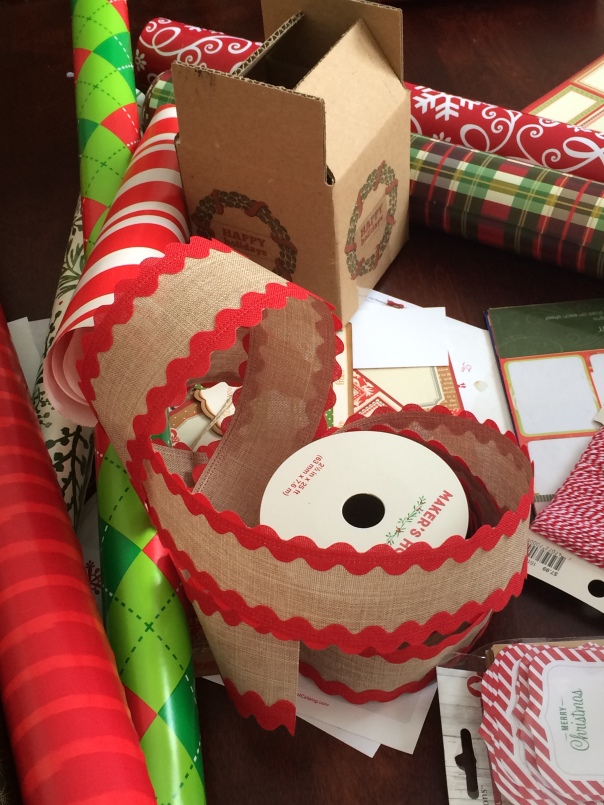