While I was growing up, there was always a book with my name on it under the tree on Christmas morning.  It might be a Nancy Drew (The Mystery of the Old Clock), a popular girls’ read (Donna Parker in Hollywood), or a classic from Louisa Mae Alcott, but no matter the title,  I spent holiday afternoons off school poring over a new story.

Later, one of the things I relished while Christmas shopping for our young daughters was choosing books for them, and these days I look for just the right ones for our grandchildren.  I still try to find books for the adults on my list, though gift certificates to Barnes and Noble or Half Price Books also serve the purpose. 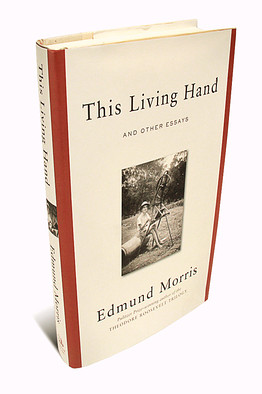 Here’s one I recommend for anyone who prizes history and biography.  Edmund Morris, biographer of presidents and earner of the Pulitzer and American Book Award, compiled forty years of his work in 2012 in This Living Hand and Other Essays.  Some of the 59 pieces were previously unpublished; they range from researching Roosevelt and Reagan to describing his own journey as a writer and a naturalized American citizen.

I gifted myself the book in 2014 before we heard him speak in New York City.  I have been working on it since then, but admit I have not gotten to them all.  Absorbing individual essays is quite a bit slower than taking a joyride through a novel which keeps asking you to finish just one more chapter before putting it down.

Arranged in chronological order of the dates they were written, the first is from 1972, about a boyhood experience in Kenya when he discovered an improbable and forbitten fruit called a bumstitch.  The last is an explanation of his unorthodox point of view for Dutch, Ronald Reagan’s biography.  An illustration or photograph heralds each chapter, squeezing out more of its intent.

Morris is a master of thoughts and an artist with the words to convey them.  He writes of figures in history, music and literature: Oliver Wendell Holmes, Henry Adams, Ludwig van Beethoven, Mark Twain, Evelyn Waugh, James Gould Cozzens, Thomas Edison…

His time at work in the Library of Congress probably transcends that of any living writer.  We read about the great institution, which he compares to Thomas Jefferson’s brain, in one chapter: serendipitous experiences like holding a William McKinley autographed piece of silk once meant for promoting a campaign, and the voluminous journals of Theodore Roosevelt.  It is a place where he discovered original musical scores composed by the father of Clare Booth Luce, something Edmund’s wife Sylvia had dreamed of finding for her own book’s research.

Sylvia Jukes Morris, biographer of Luce and Edith Roosevelt, is also the subject of a chapter, but you have to read it yourself to get an idea of the admiration and respect her husband has for her.  It is great.  He paid her a high compliment in saying that if something happened to him while writing one of his books, she could finish it herself.

Edmund Morris’s writing is both serious and funny.  It comes from many years of trying to get to the bottom of what made people do what they did.  It is for readers of books, lifelong learners like himself; and not much like the noise of bits and pieces we get from electronic media today.  This is one of those books that may be called just one thing: a gift.

3 Replies to “The Gift of a Good Read”