“Happy Fourth of July!” Americans have said to each other for 240 years.  Ever wonder what the really early celebrations were like?  I have learned about a few in particular while researching other projects: one in Boston and the others in Indiana.  They were roughly fifty years after the Revolutionary War, about the same space in time the Viet Nam War is behind us now.

A few years ago I sat at a table in the Pierpont Morgan Library in Manhattan looking for information about a boyhood friend of Theodore Roosevelt’s.  I had a lead that his mother’s papers were there.  While I didn’t find a lot about the boy named Freddie, I did stumble onto some very early letters written to and from his ancestors, particularly one dated July 20, 1820.

J.M. Thun, of Boston, was writing to Mary P. Cady, of Plainfield, Connecticut.  Miss Thun told of fireworks on the common in the evening, with 20,000 ladies and gentlemen present (half the population of the city at the time).  She wished her friend could “participate in the pleasure which I received in witnessing such a spectacle.”

Also in the letter she asked if the minister in Mary’s church was engaged yet.  “Ministers, you know, are in a greater hurry to be married than anyone else…If he said one girl was good, a second lovely, and a third precious it is evident he is in love with someone…” 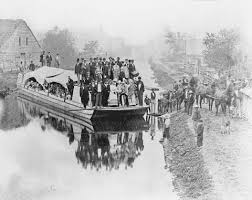 A little while after that great display of fireworks on the new country’s northeastern coast, there were some other Independence Day celebrations I’ve come to know.  As an interpreter at the Historic Forks of the Wabash I try to bring the Wabash and Erie Canal days to life for fourth graders on field trips.

On July 4, 1835 the canal between Huntington and Fort Wayne officially opened.  It was big news.  At 5 mph, a new, superfast horse-drawn packet was taking citizens from both cities on its first trip.  The next year, as more of the waterway was finished, they repeated the Independence Day party.  The boat Indiana transported passengers from town to town, with dancing and a little drinking of “good whiskey” on board.  Belles representing the states marched in a great parade, with Hugh McCulloch, secretary of the Treasury under three presidents, the guest speaker.

When the Wabash and Erie Canal opened, Indians still lived in the area.  But the boats that traversed it would be the beginning of the Miami people’s sad journey west in a few years.

The people of Fort Wayne celebrated the connection of the canal to Lake Erie on July 4, 1842.  A cannon captured from the British in the War of 1812 greeted guests, who included General Lewis Cass.   He’d been governor of the Michigan Territory and U.S. Secretary of War under Andrew Jackson, and would be the Democratic nominee for president in another six years.  Cass stepped off the boat onto the gangplank, acknowledging cheers and applause — and fell right into four feet of water.

A large public banquet was served in the evening.

This is an artist’s depiction of the first day of the Erie Canal, but it fits!  www.eriecanal.org

There were not many more years to celebrate canal side, however, since the steam locomotive rendered its way of traveling and transporting goods obsolete.

Boat rides.  Fireworks.  Parades and dinners.  Some summer fun, designed around the most important day in our country’s history, remains constant.  In the middle of your festivity, remember sacrifices others have made that we may have a unified, peaceful day.

Information for this blog from the Allen County Public Library, “Fort Wayne on the Old Canal,” article from the University of Illinois at Urbana; and the Pierpont Morgan Library, Folder 212.590.0315, Papers of Maria Molestina.