Gliding past a bend in the Wabash River, a canoe stops at the slope of sand and rock.  Paddles are put inside as it’s carried for a distance along dry land.

At the Historic Forks of the Wabash in Huntington County, people still traverse the river in canoes.  While they can’t stop to trade with the Miami people and or see the chief, they can visit his residence.  The home, two other historic buildings and a museum cluster in a grassy park off US 24, just west of SR 9.

The Chief’s House is the centerpiece of the Forks of the Wabash property.  Which chief, you say?  There were two who lived here.  One was Jean Baptiste Richardville, Pinsiwa (“the wildcat”).  The other was his son-in-law, Chief Francis La Fontaine, Topeah (“frost on leaves”). 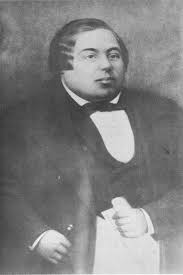 An architectural analysis from the 1970s indicates the house was built in two different phases, confirming sources which say Chief Richardville (1761-1841) planned it to use as a meeting place for treaties and that he also stayed here while visiting his people (His permanent brick home of similar Greek Revival design is on the St. Mary’s River in Fort Wayne).  It also confirms sources which say Chief La Fontaine (1810-1847) and his family lived in it until Indian Removal.

Richardville did not live to see his people taken west; La Fontaine traveled with them, but died in West Lafayette on his return to Indiana.

Today one can discover Indiana history by touring the Chief’s House, the Nuck Family House, and a period log schoolhouse on the grounds.  The museum building also has exhibits on pioneer life, trading, and the Wabash-Erie Canal.  School tours, interpreted by retired teachers and local members of the Forks of the Wabash, are given in the spring and fall.

During Huntington’s Heritage Days celebration on Saturday,  June 18 at 4 p.m., a vaudeville show will be presented at the Richardville Room in the museum.  The next day, Sunday, June 19, tours of all the buildings will be offered from 1 to 4 p.m.  Charge for each event is $5.

A new scale model kit of the home will be available in the gift shop, too, for those who might like to try recreating a little bit of history themselves.