The first electric range was introduced in 1914, around the time my grandparents were introduced to each other.  World War 1 was “modernizing” civilization across the Atlantic, but in most homes cooking was still done over and inside of a wood-burning stove.  You split and chopped wood for it, and what was life if not getting fuel for free with a little extra labor?  Of course, it wasn’t a little.  The trade-off was that their work resulted in delicious meals the likes of which we will never see, smell or taste.  We can only imagine the culinary artistry perfected by spending years in old kitchens, steamy in summer and drafty in winter.

Recipe (often spelled receipt) language was different because our ancestors’ life experiences were different than ours — closer to earth, simpler to plan, more familiar from field and garden to the table.  Here are some receipts which are offered on the internet: gleaned from published books, magazines, and newspaper clippings.  Run-on sentences did not bother the cooks, apparently.  Most libraries have collections of old cookbooks which are equally fascinating. 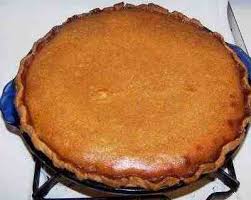 Take a small pumpkin of the sugar variety, cut it open, scrape out the soft portion, place it in your baking-pan in the oven, and bake until tender.  Scrape it out of the shell and rub through your colander.  Add 1 cup of sugar, three tablespoonfuls of molasses, a half-teaspoonful of salt and a teaspoonful of ginger and cinnamon.  Line plates with nice crust, pinched up at the edge to make a deep pie, and pour in the mixture, I always bake the crust slightly, to stiffen it, before putting in the hot pumpkin filling.  This recipe makes two nice pies. (www.joycetice.com)

In a large mixing bowl sift together flour, sugar, baking powder and salt.  Add butter, milk and vanilla. Beat for 3-4 minutes, occasionally scraping sides of bowl. Add eggs, beat for 3 more minutes.  Pour batter into prepared pans, dividing equally among both. Bake 30 to 35 minutes at moderate heat or until toothpick comes out clean.  Cool in pans on wire racks 10 minutes. Turn out and cool thoroughly on wire racks. Frost with your favorite frosting.  (http://www.cinnamonspiceandeverythingnice.com, from McCall’s 1910 Cookbook)

In case you hadn’t guessed, the titles of the last two “receipts” were Pumpkin Pie and Butter Cake.  A spacing glitch with the program prevented me from tagging them.  Top photo: http://www.livinghistory.wordpress.com.