Ha! You thought I was going to talk about unrequited love, or maybe the legacy of the Mamas and the Papas.  I just tacked on the last three words to throw you off.

Expressions that have been written or said too many times should draw a penalty of some kind. A reader’s refusal to go any further? Termination of employment? Hanging by the thumbs in a newspaper office?

I’d better stop drinking this Nicaraguan coffee and slow down.

It is irritating, to some degree. to hear the same things over and over. 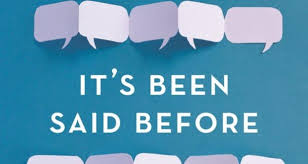 Expressing ourselves means we should probably make an effort to think up our own way to say things.  At least most of the time.  A future rumination here will center on the commonplace use of templates.

If you don’t have something original to say, don’t say it.  Maybe I’d better rephrase that.