Some have pronounced the Dutch name Roosevelt with an “oo” — but it is supposed to sound like the old-fashioned flower of its meaning, “field of roses.”  In the early 1800s TR’s grandmother, Margaret Barnhill Roosevelt, kept a big rose garden behind their mansion on Union Square in Manhattan. Her favorite, as well as that of her son Theodore, was the yellow saffronia.  The night that his son Theodore first ate supper as president in the White House, he noticed yellow roses in the centerpiece. “I believe there is a blessing connected with this,” he said to his sisters, guests at the table.

Sarah Delano R00sevelt, who married a distant cousin of TR’s, had a rose garden at her home in Hyde Park, New York, where her son Franklin’s family also lived.  Today Franklin and Eleanor’s final resting place is nearby.

From the rose garden at Hyde Park, New York. http://www.postcardsfromthewoods.blogspot.com

Roses have played a part in history, art, poetry, literature, medicine, music, fashion, perfume and cuisine.  According to Greek mythology, blood from Aphrodite’s foot changed the white rose to red when she was trying to save her mortal lover, Adonis.  The first known painting of the fragrant blooms was from Crete in 1600 BC; Confucius wrote about roses growing in the Imperial Gardens of China.  Maybe you know some of these facts, or maybe, like me, you’re realizing them for the first time. 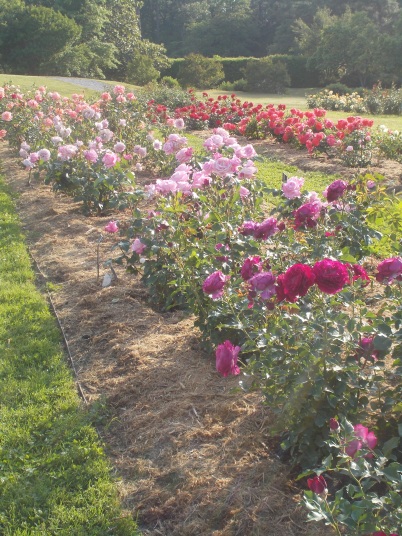 The Botanical Gardens of Norfolk, Virginia — a perfect field of roses in May.

3 Replies to “Field of Roses”