Climbing.  Always more ancient stairs.  On our trip to Israel, I started to groan every time we faced a ruined ampitheater or city wall.  Then I wondered who else had tread on them, or other steps before them.  It turned into a poem which was also inspired by a laser light show with an amazing soundtrack, on a crisp night at the Tower of David Museum in Jerusalem. 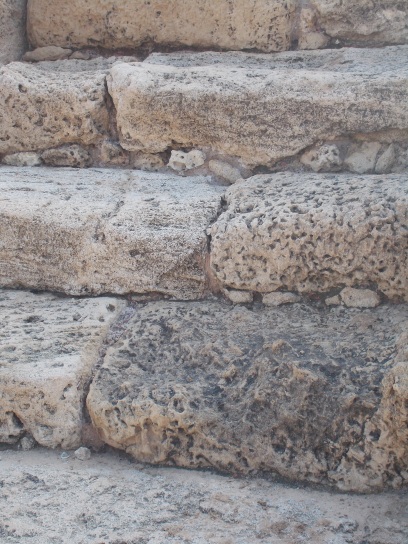 Steps of stone top one another

Inside the wall of the old town

O’er the ages groaning with

The weight of humans bearing down.

For the Ark to be at rest

As a warrior, he could not make it

And bid his son to do his best.

In the temple, lined with gilt

For “The Great I Am” was built.

Solomon’s wisdom in the past,

Numbered ten tribes at the helm.

By Nebuchadnezzar and his army

Battered steps would soon be found

Stones of the wall fell to the ground.

It went home to build anew

The second temple rose from rubble

A testament for every Jew.

Then the Greeks of Alexander

Brought their culture in a trample

Maccabees came to the rescue,

Purged and purified the temple.

And came God’s Son, Jesus!  Who for the city cried —

Then died, and rose, to make us heirs.

Took the walls in Palestine.

Until Crusaders filed in

For God, a holy war to win.

Then four hundred years of sultans,

Prosperity, suffering in this rule.

To the British went the spoils

Of a horror — worldwide war

Expansion of an island kingdom

Conflicted first, among the camps

A constant threat of terror rants.

Whose will be the final footsteps

Above the stairway hewn from stone?

God has promised, and we know that

It is Jesus, Christ, alone!