One writer likes to listen to stories of another, but when they’re coming from Pullitzer Prize and American Book Award winner Edmund Morris, ears upshift to a different plane.

A great storyteller, like the presidents he’s written about.  (Thornwillow Press photo)

Morris gave a book talk last Friday night in New York for members of the Theodore Roosevelt Association, something my daughter and I had looked forward to attending for several months.  The author spoke about his new collector’s volume, Nine Lives of Theodore Roosevelt, exquisitely produced by Thornwillow Press.  Who but Edmund Morris to choose nine categories profiled by Theodore’s writings?  Who but the creator of the trilogy The Rise of Theodore Roosevelt, Theodore Rex, and Colonel Roosevelt, which total 2,500 pages?  Morris oughta know the essence of the twenty-sixth president: He spent thirty years of his life studying the sixty of TR’s.

In person, as in print, he didn’t disappoint us — my favorite story was of Margaret Thatcher quoting TR’s “Man in the Arena” impromptu at a party for the Reagans.  Morris described the speech as “catnip for other orators,” a metaphor which put me in mind of the times our old housecat escaped to a patch of the stuff out by the barn.  Catnip for orators!  I love his words, even the ones that keep me from speed reading his books because I have to look them up.

This Living Hand and Other Essays (Random House, 2013), is a chronological collection of Morris’s work from 1972 to 2003.  Most of them have been published elsewhere, a few haven’t, and some are talks he’s given.  He chose images for the beginning of each piece which represent his thoughts as he was composing.  You need to read this.  He was pleased to hear that I had, when I got to speak with him after the presentation. 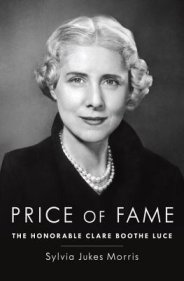 One of the essays in Living Hand is “Lady of Letters,” a tribute to his wife, Sylvia Jukes Morris.  She was also at the Friday event and also a joy to speak with.  Sylvia, whose Edith Roosevelt biography is a classic, just published Price of Fame (Random House, 2014), the second half of the life of Clare Booth Luce.  I told her I had started it but that it was taking me some time to absorb.  She said, “Yes, she had so much depth, and so many layers, didn’t she?”

Mr. and Mrs. Morris’s depth in literature, wit and audience appeal is hard to match.  They are distinguished and down-to-earth.  I could listen to them every Friday night, but I guess I’ll have to be satisfied with reading their books.  That will not be hard.

2 Replies to “The Morrises”