Some groan at the thought of endnotes, but much can be taken from them.  They often add explanations authors wouldn’t want one reader to miss.  After all, he or she may never pass that way again.

Edmund Morris, King of Endnotes, gives his audience two books in each biography: the primary text, and the notes in the back.  I can’t try to approach that level.  His card files have been documented on more than one C-Span interview. But I did find some tidbits at the end of The Amazing Bird Collection to share this week. 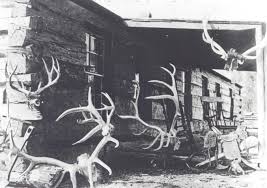 From Wilderness Writings, by Theodore Roosevelt: In post-Civil War days, photography was difficult for amateurs because of the instruments and the developing process, but when they got a bit more portable, Theodore liked to shoot with a camera as much as he did with a gun.  He developed prints himself in the cellar of his North Dakota ranch house.  His book, Through the Brazilian Wilderness, lists photography equipment and circa 1915 directions for using it.

From My Brother Theodore Roosevelt, by Corinne Roosevelt Robinson:  Soon after the Civil War ended, Theodore’s mother received a mysterious letter.  It said that a young man would wait to meet them under a certain tree at Central Park.  It turned out to be her youngest brother, Irvine Bulloch, a Confederate soldier who fought on the warship Alabama (captained by their older brother James).  They had a happy but short reunion, after which Irvine moved to a permanent home in England.

“Teedie and Ellie” watch from a second story window.

From The Life and Times of Theodore Roosevelt, by Stefan Lorant: Edith Roosevelt, TR’s widow, confirmed that in a famous photograph of Abraham Lincoln’s funeral procession in New York City, Theodore and his brother Elliott were the two small boys looking out the window of a mansion.  Little Edie, their friend, had been watching with them at the home of the boys’ grandfather, Cornelius.  When she cried, they pushed her into a back room.  Lorant says that he was so charmed by Mrs. Roosevelt that he said, “If I were twenty years older, I’d propose to you.”  She answered, “Mr. Lorant, if I were twenty years younger, I would accept.”

From The Boy Hunters, by Mayne Reid, a book Theodore read growing up: A father sending his boys to the western frontier to hunt was described in this way.  “Like the great Audubon, he was fond of the outside world.  He was fond of drawing, his lessons came from nature itself…he combined a passion for the chase with his delicate taste for scientific pursuits.”  That could have been part of the eulogy at TR’s funeral. 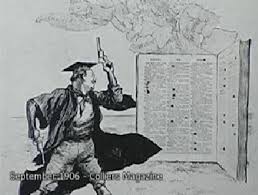 From An Autobiography, by Theodore Roosevelt: During his presidency, Theodore tried to get Congress to pass a bill on simplified spelling.  It did not pass, but the press had a lot of fun with it.  Some of the words he wanted to shorten have evolved anyway (He might have liked texting).