Martha Bulloch Roosevelt’s mother, who never wanted to know of a Union victory, passed away before Lee surrendered.  Then came the day when seven-year-old Theodore and six-year-old Elliott watched Lincoln’s funeral procession from their other grandparents’ mansion on Union Square.  As if to physically lift the gloom of the previous four years, Mittie redecorated the  townhouse on East 20th Street.  She had the haircloth parlor furniture covered in blue damask.  Brighter wallpaper, draperies, and carpets replaced the neutral backgrounds of the past.

The parlor at the Theodore Roosevelt Birthplace today reflects the stylish choices Mittie made after the war.  National Park Service photo.

Mittie was more beautiful than ever.  Still the belle, she wore white in every season because her husband, Thee, liked to see her in it.  Two of her brothers who’d fought with the Confederacy had moved to England and she desperately wanted to visit them.  So in the spring of 1869, the family left by steamboat for Europe.  It was the first of two year-long Grand Tours they would take. 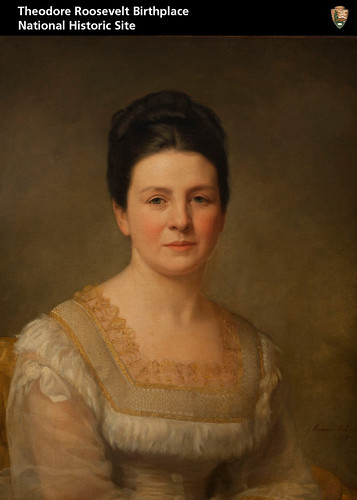 During the first trip, they had a happy reunion with the Bullochs and saw the Old World in style.  Art galleries, museums, zoos, famous castles and cathedrals provided lessons for the children.  Thee and Mittie had supper with titled ladies and gentlemen at the estate of the Duke of Devonshire; they all loved hiking in the fresh air of the Alps.

On the second trip, which began in 1872, they rode a houseboat down the Nile River where teenaged Theodore quenched his thirst for bird hunting.  They camped in tents in the Holy Land and took in the Vienna Exposition, of which Thee was an American commissioner.   Then he returned home to work and oversee the building of a new house close to Central Park.  Mittie and Bamie headed to Carlsbad for mineral baths and to Paris for shopping; the youngest three stayed with a German family to study.  When all were reunited at home, it was the grand new place on West 57th Street.

This photograph of Mittie’s parlor uptown was taken after Elliott’s hunting trip to India, with his tiger rug before the fireplace.  National Park Service photo.

Mittie, according to some, went into a decline of sorts.  Her headaches and digestive troubles lingered.  She had always been fashionably late for carriages that waited in the street, but sometimes she didn’t make it out to them at all.  Bamie often acted as hostess for her father when callers came.  Mittie also had a fettish for cleanliness, insisting that a sheet be put on the floor for doctors who came to see her.

The children grew; Bamie had her debut; summer homes changed; Theodore went to Harvard.  In 1878, his second year there, Thee died of cancer.  Then the children took even greater care of their “little motherling.”  In 1880 Mittie welcomed Theodore’s bride, Alice Lee, into the family, with teas and receptions.  But the end came too soon for Mittie, also, four years later from typhoid fever.  It was an unthinkable double tragedy: Alice died on the same day in the same house.  Perhaps in the midst of the grief for the young mother who would never know her child, there was lost some reflection on the life of the forty-eight-year-old “unreconstructed” lady from the South.

A friend who had known the Bullochs in Georgia observed that Theodore Roosevelt got his splendid “dash” from his mother.  Though Mittie was delicate as a china doll, her influence on her children was great.  Daughter Corinne said simply, “Her devotions wrapped ’round us as with a mantle.”